May this be our Happiness.

"May ours be the happiness of him who,

content with less than little,pleased with whatever pleases the Father,
anxious for nothing,
thankful for anything,
prayerful in everything;
can say with Paul,
'I have learned to be content whatever the circumstances. I know what it is to be in need, and I know what it is to have plenty. I have learned the secret of being content in any and every situation, whether well fed or hungry, whether living in plenty or in want.' Philippians 4:11-12"
Thomas Guthrie
Email ThisBlogThis!Share to TwitterShare to FacebookShare to Pinterest

The Lord sometimes suffers his people to be driven into a corner that they may experimentally know how necessary he is to them. Whatever our morning’s need may be, let it like a strong current bear us to the ocean of divine love. Jesus can soon remove our sorrow, he delights to comfort us. Let us hasten to him while he waits to meet us.

C. H. Spurgeon, Morning and Evening: Daily Readings (London: Passmore & Alabaster, 1896).
Repentance and faith are both necessary and inseparable. Spurgeon beautifully said, “Repentance is the tear in faith’s eye.” Conversely, we might say, “and faith is the gleam of hope in the wet eye of repentance.” (Beeke quoting Spurgeon.)
“As Thomas Brooks (1608–1680) said, “A family without prayer is like a house without a roof, open and exposed to all the storms of heaven.”
― Joel R. Beeke, A Puritan Theology: Doctrine for Life
Head knowledge is not evil in and of itself. Most of our Reformed and Puritan forefathers were highly educated. The Reformers never tired of stressing the value of Christian education. But this education must be empowered by the Holy Spirit and applied to the heart. Head knowledge is insufficient without the Spirit’s application to the inward man. -- Joel Beeke
"Look steadily at Jesus on the cross, if you want to feel inward peace. Look to anything of your own, and you will never feel comfortable. Your own life and doings, your own repentance, your own morality and regularity, your own church-going, your own Bible-reading and your prayers, what are they all but a huge mass of imperfection? Rest not upon them for a moment, in the matter of your justification. As evidences of your wishes, feelings, bias, tastes, habits, inclinations, they may be useful helps occasionally. As grounds of acceptance with God they are worthless rubbish. They cannot give you comfort; they cannot bear the weight of your sins; they cannot stand the searching eye of God. Rest on nothing but Christ crucified, and the atonement He made for you on Calvary. This, this alone is the way of peace." ~ J.C.Ryle
“Jesus calls all sinners to repent. True repentance is not a nebulous response of sorrow; it requires definite actions. Repentance so transforms the mind that it results in a changed life. Repentance does not merely say “I’m sorry” (similar to what we say when we accidentally step on someone’s foot). Rather, true repentance says from the heart, “I’ve been wrong and grieve over my sin, but now I see the truth, and I will change my ways accordingly.” ― Joel R. Beeke,
“Prayer is thus a means ordained to receive what God has planned to bestow.[22]” ― Joel R. Beeke
Email ThisBlogThis!Share to TwitterShare to FacebookShare to Pinterest 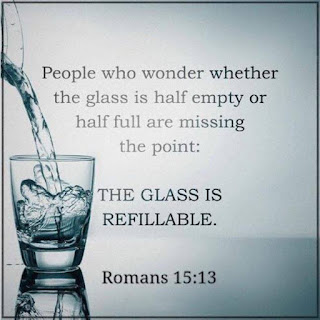 "Regeneration, or that great change without which a man cannot see the kingdom of God, is the effect of the Almighty power. Neither education, endeavors, nor arguments can open the eyes of the blind.

It is God alone, who at first caused light to shine out of darkness, who can shine into our hearts, "to give us the light of the knowledge of the glory of God in the face of Jesus Christ." People may attain some natural ideas of spiritual truths by reading books, or hearing sermons, and may thereby become wise in their own conceits; they may learn to imitate the language of an experienced Christian; but they know not what they say, nor whereof they affirm, and are as distant from the true meaning of the terms, as a blind man, who pronounces the words blue or red, is from the ideas which those words raise in the mind of the person who can distinguish colors by his sight.

And from hence, we may infer the sovereignty, as well as the efficacy, of grace; since it is evident, not only that the objective light, the word of God, is not afforded universally to all men; but that those who enjoy the same outward means, have not all the same perceptions.

There are many who stumble in the noon day, not for want of light, but for the want of eyes; and they who now see were once blind, even as others, and had neither power nor will to enlighten their own minds. It is a mercy, however, when people are so far sensible of their own blindness, as to be willing to wait for the manifestation of the Lord's power, in the ordinances of His appointment.

He came into the world, and sends forth His Gospel, that those who see not, may see; and when there is a desire in the heart for spiritual sight, it shall in due time be answered."

I know this is a long post, so don't feel obligated to read it; I'm just saying it was sobering material that very few sermons today will remotely resemble. More from John Newton below (who wrote the hymn "Amazing Grace"):

The Lord is Compassionate

It is important to understand that when a child of God sins, their Heavenly Father is not looking on them in wrath. A Christian should never think that God has even a single drop of wrath stored up for them. God only has glorious treasures stored up for us, and wrath isn’t one of them. Christ drank that cup dry. There wasn’t a drop of God’s wrath left for God’s elect when Christ Jesus finished that cup. To say otherwise is to say that Christ failed.

When a child of God sins, it is true that our Heavenly Father is displeased, and He will even surely chastise us severely if He sees it fit to do so, but He is also looking on us in deep pity. He looks on us with a tender heart. He looks on us with great compassion like a mother looks on her little child that is fighting cancer. His heart goes out to us. The only wrath involved is His wrath toward our Accuser, and the sin that burdens us.

And so if any child of the Most High God has stumbled recently, no matter how recent or severe it was, they must remind themselves of these truths. They must not think harsh thoughts about God. Do not think He is looking on you in disgust or wrath. Christ Jesus did not die for you when you hated Him so that you would think hard thoughts of Him, as though He didn’t do enough to prove His everlasting love for you. Hard thoughts of Him are lies, and they will only hinder you from running to Him and embracing Him.

The Lord knows the heart He has given you, He knows there are holy desires in it, He sees the Grace He planted in your heart even when you don’t, and He knows you are weak and still fail often. He knows that you hate sin. He is the one who put that love for Him and hatred for sin in you. The thorn in your flesh is there in order for you to draw nearer to Him, and to gain a greater sense of His grace. Yes, you are a failure, but His Son isn’t. He is not looking at what you’ve done, He is looking at what His Son has done.

Run to your loving and lovely Lord Jesus and enjoy your God. Do not withhold your love from the One who loves you more than anyone does. It should help you to know that He desires your love more than you desire His. -- Joshua Arnold.

BEATEN ON MY FEET

When I was beaten on the bottom of my feet, my tongue cried. Why did my tongue cry? It was not beaten. It cried because the tongue and the feet are both part of the same body. And you free Christians are part of the same Body of Christ that is now beaten in prisons in restricted nations, that even now gives martyrs for Christ. Can you not feel our pain? -Pastor Richard Wurmbrand, Tortured for Christ

Email ThisBlogThis!Share to TwitterShare to FacebookShare to Pinterest
Labels: Wurmbrand

Beware of both undevotional theology and untheological devotion. --Mike Reeves.

Quotes of the Day

"God's glory is the end of our being and doing, for being and doing are both from him, and therefore for him alone." - Thomas Manton
"God sends every bird its food, but he does not throw it into the nest: he gives us our daily bread, but it is through our own labour." - C.H. Spurgeon
Blessings at times come to us through our labors and at times without our labors, but never because of our labors, for God always gives them because of His undeserved mercy. - Martin Luther
Everything is necessary that he sends. Nothing can be necessary that he withholds.--John Newton -
The duties God requires of us are not in proportion to the strength we possess in ourselves. Rather, they are proportional to the resources available to us in Christ. We do not have the ability in ourselves to accomplish the least of God’s tasks. This is a law of grace. When we recognize it is impossible to perform a duty in our own strength, we will discover the secret of its accomplishment. But alas, this is a secret we often fail to discover.--John Owen.
"Affliction does not rise out of the dust or come to men by chance; but it is the Lord that sends it, and we should own and reverence His hand in it." - Thomas Boston.
Far from being a history of a harsh God, the Old Testament is the record of a God who is patient in the extreme. —R.C. Sproul
Email ThisBlogThis!Share to TwitterShare to FacebookShare to Pinterest
Labels: QOD
Older Posts Home
Subscribe to: Posts (Atom)